I have discovered a new passion: 5K races

I have decided that I like running 5K races because they allow me to exercise with a purpose. My efforts each race are directly correlated to that amount of training and exercise I did in preparation for the race. If I schedule a race every couple of months, I cannot stop training since that would negatively impact my race time.

As you can tell from reading this blog, I also like to have fun. I do not mind doing a 5K, but if there is a theme, I definitely want to sign up.

That is why I signed up for the GoGlow 5K in Greenville, SC. It was hosted by Half Moon Outfitters and the track was at Conestee park (on Mauldin Road).
My friend and I got there 6:45 because in the email instructions, it said to get there early to make sure we get a good parking space. We could have arrived at 7:55 and still got a good parking spot. They overstated that.

Registration was a breeze. No waiting at all. When we got our shirts, we changed into them since they glowed in the dark. Then we went to the paint station and finger-painted neon paint on our face, arms and legs. In the email, they said there would be a painting station. The way they said it, made it seem like it was going to be larger than it was. There was one table with 4 or 5 bottles of different colors of paint and some paper towel.

More than one person said, “Where is the painting station?” I responded, “It’s here. I thought it would be bigger too.”

The race was supposed to start at 8:00, but it was not dark enough so they delayed it until close to 9:00pm.

And we were off! The email said to have a flashlight or headlamp because the trail would be really dark. They did not overstate that. In any event, they might have understated it. They should have put that in big, bold letters. I thought “How dark could it be?” but brought my flashlight anyway. It was SUPER PITCH BLACK dark. Seriously dark and the little glow sticks did not help light the path. And since we were running through the forest, there were tree roots, mud puddles, and other sorts of nature things that would have annoyed me if I stepped in it. As it was, even with the flashlight, I almost tripped twice on tree roots. Some young girls that were ahead of us warned us about the puddles. I was wearing new running shoes and would have been quite put out if I had got them dirty in the mud! I forgot my bug spray, but thankfully, there were none biting that night.

We finished in 59 minutes and 30 seconds. Not my best time, but considering it was pitch black dark in a forest trail with roots and steep inclines, I think we did pretty well.

Overall, I had fun. I would do it again. The race event coordinators did a good job of keeping things organized. However, I would have liked more direction on the trail. There were times when we were not sure which way to go 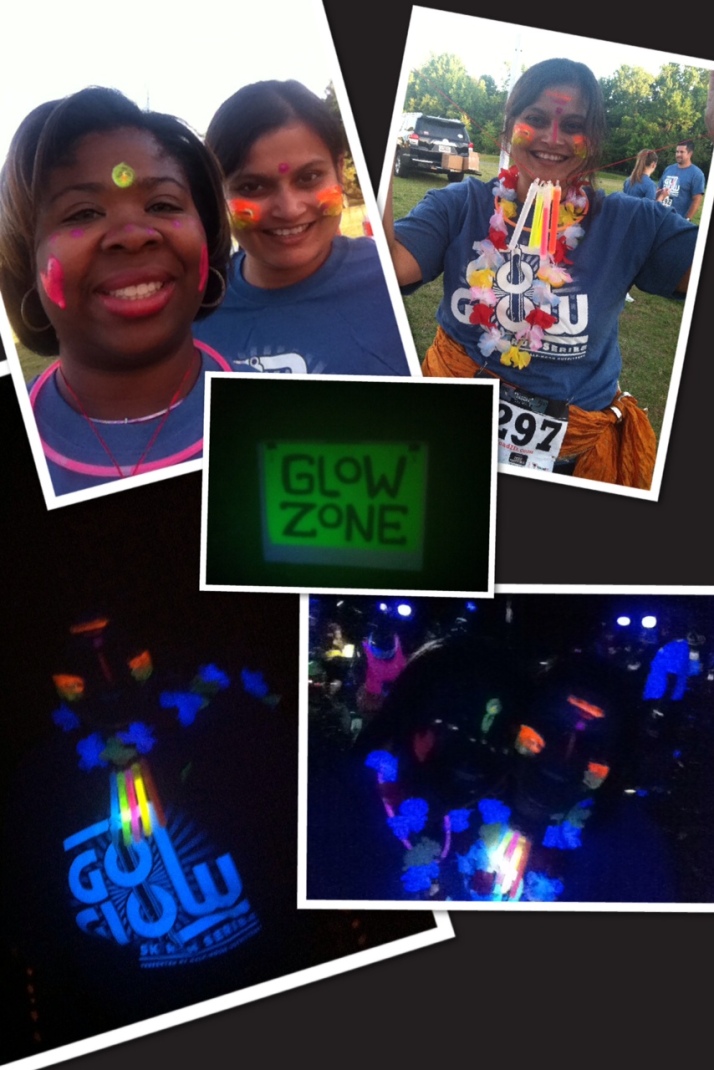