Welcome author Eliza Green for being my guest today. Eliza is author of  Becoming Human: A Dystopian Post Apocalyptic Novel 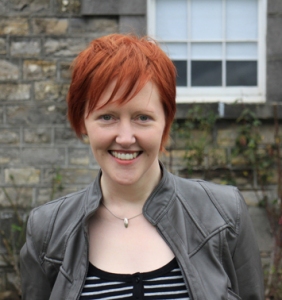 I went to see Brooklyn several weeks ago, before it was tipped for an Oscar. Yes, I was probably one of the few who didn’t go to see a movie based on upcoming awards shows! The story begins in dear old Ireland in a town called Enniscorthy. Our protagonist, Eilis, (pronounced Eye- Leesh) played by Saoirse Ronan (pronounced Surr-Shah) is doing what most girls in Ireland did in the fifties: work in a dead end job in the local shop until they get married and repopulate the earth with dozens of children because Ireland, unofficially ruled by the Catholic Church back then, didn’t believe in contraception until women rebelled in the 80’s/early 90’s and the government were forced to bring it in.

So poor old Eilis is stuck in a town where the men are either farmers or mummy’s boys. She is offered the opportunity to live in America through an Irish priest and a church-funded scholarship. (Don’t judge Ireland too harshly by “Spotlight”s standards. Not all Irish priests were/are bad.) The priest is played by English actor, Jim Broadbent. He’s actually quite good so we’ll forgive the director for using non-Irish actors!

Eilis leaves behind a cranky mother and a supportive sister to live in a boarding house in Brooklyn with several other girls hell bent on mischief and a no nonsense house mother played by the excellent Julie Walters (not Irish, but that’s okay. Her accent and attitude is spot on :))

So poor Eilis is living the plain life in Brooklyn while her house sisters are living it up. Things change when she meets tough Italian plumber, Tony (aren’t all Italian Americans called Tony? :D) played by Emory Cohen. There’s a little bit of playfulness between the pair, which is refreshing as Ireland in the 1940’s didn’t have much of that. Things go well until Eilis receives a call that demands she return to Ireland.

This does not bode well for her relationship with Tony. She goes home with the promise to return to America and Tony, and settles back into her old life there. Her cloying mother and the claustrophobic town gets under her skin and the locals take a dislike to her colourful clothes (clothes in Ireland back then were brown, grey or black). She meets another man called Jim (why, oh why didn’t she meet him the first time? Things are getting complicated!).

Jim is played by the charismatic Domhnall Gleeson (pronounced Dough –nal). So Eilis has a tough decision to make. Should she stay or should she go?

Nick Hornby, a UK screenwriter (About A Boy and High Fidelity, two super movies), did a good job adapting this movie from Colm Toibín’s (last name pronounced Toe-Bean) book of the same name. It’s hard to capture the essence of the Irish. Many people try to do it, but most fail. There’s a unique quirkiness about our humour that can only be explained by someone who understands it. Nick does a good job!

My verdict? Slow moving movie, but it showcases some great moments of humour, sadness and unfortunate Irish bigotry in the form of the local shop keeper in Enniscorthy.

Eliza Green tried her hand at fashion designing, massage, painting, and even ghost hunting, before finding her love of writing. She often wonders if her desire to change the ending of a particular glittery vampire story steered her in that direction (it did). After earning her degree in marketing, Eliza went on to work in  everything but marketing, but swears she uses it in everyday life, or so she tells her bank manager.

Born and raised in Dublin, Ireland, she lives there with her sci-fi loving, evil genius boyfriend. When not working on her next amazing science fiction adventure, you can find her reading, indulging in new food at an amazing restaurant or simply singing along to something with a half decent beat.

Tasked with determining the threat level on Exilon 5, Bill Taggart hunts the alien he believes murdered his wife. But what he learns about the race living there forces him to rethink everything he believes. 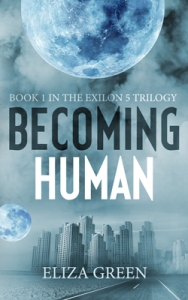