Asada food truck in Greenville gets two thumbs up from me. I have been to several of the food truck events where Asada and Neue (another Greenville food truck to be discussed in another post) have set up shop.

Asada focuses on Latin fusion of flavors. I don’t know from which countries the chefs hail, but their food has influences in a lot of different styles. The mainstay on their menu is the different variation of tacos. However, there are different daily specials in addition to the menu. I usually try the specials just because I know I can get the regular menu items any time.

The picture shows what I ordered one evening in November 2012: (top) short ribs with plantain chips and fried cheese (bottom) chicken empanadas

The short ribs were cooked in a Honduran style. There was not any sauce on the ribs. The intense seasoning permeated the meat so that any sauce would have been deemed extraneous. I could have had an entire plate of the fried cheese. It was so yummy. I think it was the queso tropical para freir. For those of you who don’t know Spanish, that means tropical cheese for frying. It is not gooey like mozzarella. Its texture is firm but soft when fried.

The chicken empanadas were to die for. The crust was so flaky like a perfect savory pie crust that it crumbled in my mouth when I bit into it. I could not focus on the flavor of the filling because I was so captivated with the crust. When I finished, I was left checking the plate for crumbs and wanting more.

If you live in Greenville SC and do not know about the food trucks, follow them on Facebook or Twitter. Their food is AMAZING! Get on location early so that you can get dessert. Every time I have ordered dessert from Asada, they have been sold out. Boo hoo for me. But people who have had their tres leches and flan have said it was pretty delicious as well. 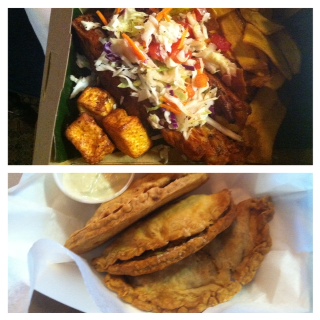