Taco Boy is an upscale taqueria in Charleston South Carolina. I say upscale because the tacos are about $4 each. This is far, far from the $1.75 that we are used to paying for tacos.

Prices aside, the tacos were pretty good. My usual order is a taco al Pastor (pork taco) but if I am paying four dollars, I want something special. I ordered the Baja fish taco and the grilled fish taco. The fish was flakey but firm enough to hold up to being in a taco. The cabbage was crisp and added crunch. I also got a side of Mexican street corn and tres leches (three milks) cake for dessert. Mexican street corn is cooked corn on the cob with mayo and cotija cheese (hard, crumbly Mexican cheese). This side dish is one of the few ways that I will eat mayo.

Their tres leches cake was OUT OF THIS WORLD. I felt like I was in Mexico eating at someone’s abuela’s (grandma) house. Tres leches cake is a sponge cake with has been soaked with 3 types of milk: whole milk, heavy cream, and sweeten condensed milk. And it is topped with whipped cream and cinnamon. This was worth the trip alone.

Taco boy has a lot going for them. They are serving quality ingredients. This is not mass-produced, frozen food. The flavor combinations are true to their Latin roots but with the modern, bold twist. I thoroughly enjoyed the food and the laid-back atmosphere. As you can see from the pictures, we sat outside. We went in October and the weather was nice. Not too hot or too cold.

I thoroughly enjoyed myself. On the other hand, hubby was grumpy.

His complaint was that there were “too many hipsters”. Plus, he balked at the $4 per taco price tag. In his defense, our local taqueria makes tacos that are just as delicious and half the price (although they do not offer a fish taco).

In defense of Taco Boy, I will also say that I have finally found a fish taco I like this side of the East Coast. Paying four dollars beats a plane trip to California in my opinion. I have been known to travel for food.

I once went to Vegas for cake…but that is a story for another time.

It is true that hipsters have been known to mess up a good restaurant. Hipsters find a “hidden gem”. Bring all their friends and then the quality of the food begins to decline.

As long as Taco boy keeps their high standards of food preparation, they should be okay. 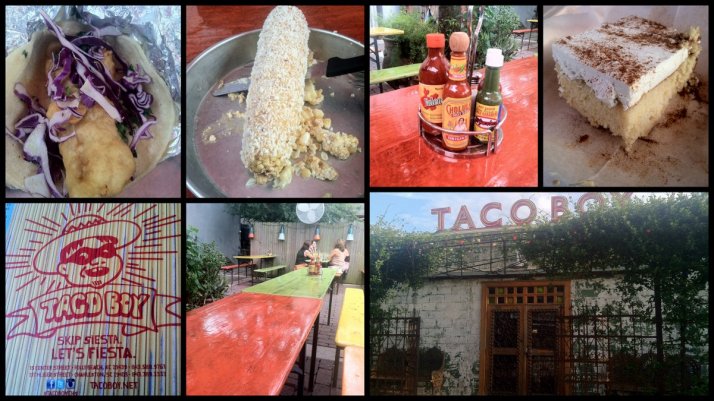