I am participating in  a blogfest called Blood, Boobs, and Carnage 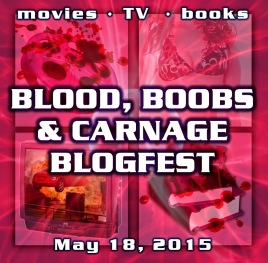 The terms were simple- choose a movie, book, or television show that fits the theme. It can be any genre that fits the bill – fantasy, science fiction, action, adventure, western, thriller, etc.  This Blogfest is hosted by Alex J Cavanaugh andHeather Gardner.

I chose the book Accidental Abduction

Synopsis
Tren is an alien that thought he was beaming up some fish from earth to sell on the universal market. He didn’t mean to abduct the human female too, but now that he has her, he wonders what to do with her.

Megan was drowning in the ocean after her boyfriend pushed her off a boat. Instead of dying, she is beamed up on to a space ship. While she knows she should be more subdued, she cannot resist being mouthy.

Tren prides himself in staying in control of his emotions and actions, but Megan pushes all his buttons and ignites his baser instincts. When she is kidnapped on purpose, he will stop at nothing to get her back.

Opinion
This book. Where do I even start? I guess I should explain why I chose it for the challenge.

When Tren decides that he is not going to deny how he feels, his enemies see kidnapping Megan as a way to manipulate him. THAT does not go well for them. He has no mercy when it comes to eliminating his enemies. Funny thing, Megan is gets a guilty thrill on the fact that he killing all these aliens to save her. She is trying to be shocked, but at the same time, she is like

It is a romance.
Tren has no nipples!
And he says she is weird for only having two breasts.

There is a line of entrails from evil villains that tried to kidnap Megan, but failed miserably. It is the wild, wild west in the universe and no one messes with Tren’s mate and gets away with it. She gets kidnapped twice and both times Tren is like

Overall,  the book made me laugh. Tren was not trying to pick up a human to be his mate, it just happened. Megan was cheeky, brazen, bold, and audacious as ever. Tren tried to intimidate her, but she had nothing to lose. To be fair, he did keep threatening to sell her. She was just calling his bluffs. With all that sexual tension going on, there was only one way it was really going to go.