Welcome, everyone, to the cover reveal for S. L. Saboviec’s Reaping Angel, Book #2 in the “Fallen Redemption” adult paranormal series.

The first book, Guarding Angel, was released in May 2014. Both covers were done by the super-fabulous Regina Wamba, of MaeIDesign.com, who’s done covers for Random House, Penguin Books, and multiple New York Times best-selling authors.

But a picture is worth a thousand words, so here’s the blurb and cover for Guarding Angel, Fallen Redemption #1:

Guardian angel Enael can’t seem to keep her human Wards in check. They’re the ones who choose their paths before reincarnating–she’s just there to help make sure they stay on track. But it’s not as easy as it might look.

When she meets and falls in love with charismatic Kaspen, a fellow Guardian, Enael’s feelings about Heaven, Hell, demons, and the life she’s known are turned upside down. Worse, angel-turned-demon Yasva, Kaspen’s former love, still holds him in her clutches. Even as Yasva works toward obtaining complete control of Earth, she taunts and haunts Kaspen’s and Enael’s lives.

Now Enael is forced to face her past (which is centuries long and bursting with secrets), her present (which is terribly unfulfilling and full of questions), and her future (which becomes more uncertain as time passes). Armed with a newfound love and fear of losing it all, she must figure out how to save the world–and the angel she loves. Which side will win? Who will Kaspen choose? Will Heaven and Earth continue to exist, or will everything go to Hell?

After the battle at the Bastille, the Council of Seraphim offers reluctant demons Enael and Kaspen a chance to return to Heaven—but only after they’ve completed sufficient penance. Ready to move past the ugly chapter in their lives, they settle into their assignments.

Voctic seduces and demeans, taunts and entices Enael, stirring centuries-old longing in her while infuriating Kaspen. Caught up in the demands of their duties, Kaspen and Enael drift apart until she finds herself isolated.

Fed up with Voctic’s harassment, Enael prepares to fight back. When he targets the new human she’s responsible for protecting, she creates her own plan. His self-proclaimed “gala of the century” will be the perfect cover for her revenge. But will a hasty decision cost her Kaspen—or even her spot in Heaven?

Add it on Goodreads here. 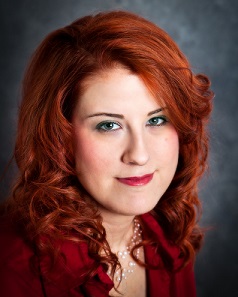 Samantha grew up in a small town in Iowa but became an expat for her Canadian husband, whom she met in the Massive Multi-player Online Role-Playing Game Star Wars: Galaxies (before the NGE, of course). She holds a B.S. in Physics, which qualifies her to B.S. about physics and occasionally do some math for the sci-fi stories she concocts. Her dark, thought-provoking science fiction & fantasy contains flawed, relatable characters and themes that challenge the status quo.

She contributes to Operation Awesome, including hosting a twice-monthly flash fiction contest. She tweets both more than she should and probably not enough @Saboviec. Her fiction is being included in the Realmwalker Publishing Group upcoming anthology The Legacy. You can find out more about her at http://www.saboviec.com.