October’s theme for the photo blogging challenge hosted by http://hoohaa.com/?p=11777 was Water. I knew this would be an easy theme for me because I was going on vacation to Costa Rica (Guanacaste region). In the middle of the rainforest and on the beach, I had plenty of chances for pictures with water.

Picture 1
Everyday it was a little cloudy and it rained. We were in the rainy season. We did not mind though and still went to the beach. It was hot and the slightly overcast sky meant the sun was not a brutal.

cloudy day at the beach

Picture 2
Near the resort, we saw locals fishing. He looked so relaxed in the water, that I wanted to capture that moment. 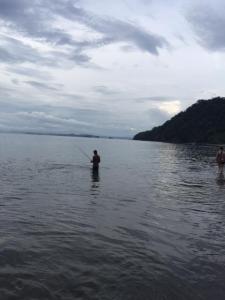 Picture 3
We took an excursion to one of the many waterfalls in the Gaunacaste region. Hubs is in this picture to give you some scale as to how large the waterfall was. I liked this one because of the contrast with the water, greenery, and black rock.

Picture 4
We went to a volcano crater and walked inside of it. The volcano was dormant at the time, but still very hot. The spring water that escaped from the earth was bubbling hot. It was mesmerizing. I knew it was boiling hot but at the same time, I wanted to touch it. I resisted and prevented getting 3rd burns.

Picture 5
On the last day, I had this cucumber, pineapple, spinach juice. In Spanish, these drinks are called “Aguas” which literally means “water”. I included it because by the last day, I was drinking healthy veggie and fruit waters to detox from all the alcohol I had been drinking during our vacation 😀

Picture 6 ****Bonus Photo ****
I love looking at the lush greenery made possible by the abundance of water in the form of rainfall.

As you can see, I had a great month and cannot wait to see what the theme will be in November 🙂